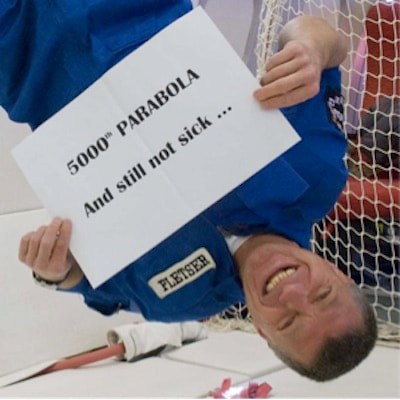 Vladimir Pletser holds a degree in Mechanical Engineering, MSc in Geophysics and PhD in Astrophysics from the University of Louvain, Belgium. He is currently the Space Operations Training Director of Blue Abyss, being responsible for providing training for future citizen astronauts before they go into the microgravity of space. His previous work includes a role as a visiting Professor/Scientific Adviser at the Technology and Engineering Centre for Space Utilization of the Chinese Academy of Sciences in Beijing, China, supporting the preparation and development of microgravity research instrumentation for parabolic flights and for the future Chinese Space Station. In addition, Vladimir spent 30 years working with the European Space Agency as a Senior Physicist/Engineer, managing ISS microgravity payload development and the ESA parabolic flight programme, where he personally logged more than 7300 parabolas, representing more than 39h 20m of weightlessness. He holds the official Guinness World Record for the number of airplanes (12) on which he flew parabolas.

Vladimir was an Astronaut Candidate for Belgium for many years and was Payload Specialist candidate for several Spacelab missions, including Spacelab LMS for which he spent two months in training at NASA-JSC, Houston. He has participated in three Mars Society international simulation campaigns of Mars missions in the Arctic Circle and Utah Desert.
​
He is visiting Professor in 20 universities in Europe, USA, Canada, Africa, Israel, and China, and has more than 500 publications, including 13 books or chapters in books. He is a member of the International Astronautical Academy and of several other academies and scientific organizations.