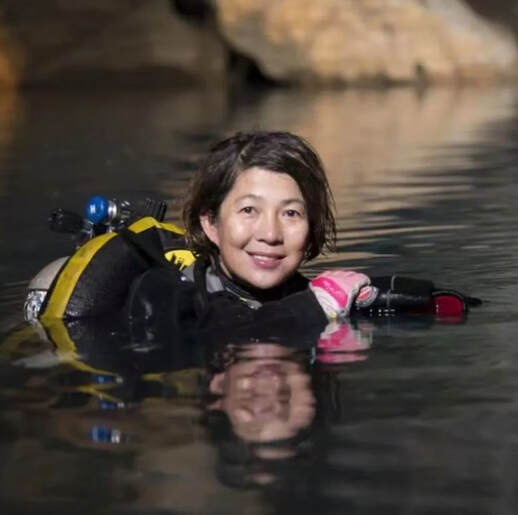 Qinghua Wei is a highly skilled diver with many years of experience. In 2006, she founded the Guangxi Paradise Diving Club where she has continued teaching for 16 years. While diving in Du’an in the Guangxi Zhuang region (China) in 2011, she discovered the presence of the rare peach blossom jellyfish.

In 2012, Wei was a member of the underwater photography team for the filming of CCTV’s "Secret Realm of Guangxi", while in 2014, she was hired as a diving technical consultant for special police training in Nanning, and a 12-year cooperative institution.
​
In 2020, she co-authored "The Beauty of Freshwater" detailing biodiversity research results from cave diving in the Guangxi region. In March 2021 she joined the MMR Sea Whale Rescue Team, and co-founded the International Cetacean Rescue Course.

Current activities also include working as an Instructor for the Asian Diving Academy (since 2015), and as an expert for the diving editorial board of the State Sports Bureau (since 2016). In addition, she works as a consultant and co-curator of the Ursa Minor space station programme in Guangxi region, promoting and initiating the world's first underwater weightlessness simulation training system for civilian astronauts.