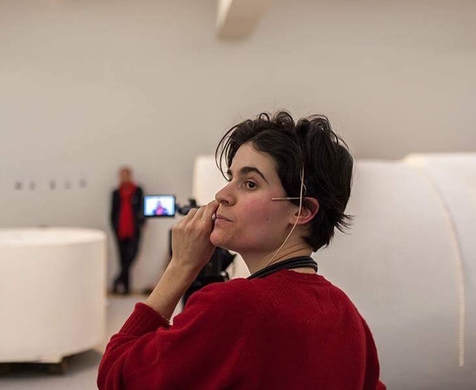 Audrey Cottin is a French researcher and visual artist living and working in Belgium. She studied visual art at the Art Center College of Design (Pasadena - California), graduated from the National School of Fine Art (Paris - France), Higher Institute for Fine Arts (HISK, Gent - Belgium) and A.PASS (Brussels - Belgium). In addition, Audrey has lectured at the Paris school Science-Po (2012).

Her art practice exists in the form of extensive multidisciplinary collaborations. It is in the company of people who keep this world as a continuous creative experiment, in which Cottin explores and informs her visual research and work. Under the format of sculpture and acting performances, the art works are challenging the individual and group cognitive behaviour of the audience.

Since 2013, Audrey has been developing a long-term research on the old fashion concept of the ‘‘Operating Theatre’’. The series of works combine recorded films and live acting performances, following scientist, doctor and neuroscientist protocols. The series was first launched in Brazil during the 2013 Biennial do Mercosul, and followed it’s course in Europe at the Pompidou museum, S.M.A.K. museum and other Belgium institutions. Guided by scientists, doctors, artists and the curious of tomorrow, Cottin’s research now focuses on domestic, industrial and space radiation.