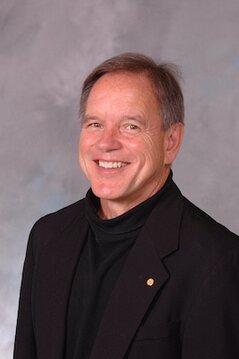 ​Dr. Alan Hargens is Professor and Director Emeritus of the Orthopaedic Clinical Physiology Lab at the University of California, San Diego, USA. He received his Ph.D. from the Scripps Institution of Oceanography at the University of California, San Diego.
Collaborating with scientists across the globe, Dr. Hargens serves as Co-Principal Investigator for the most complex human physiological experiment ever undertaken on the ISS "Fluid Shifts," an investigation assessing how spaceflight induced fluid shifts contribute to vision impairment. In addition, he was a Co-Investigator on the one-year mission TWINS study.
Dr. Hargens has published 10 books, over 300 peer-reviewed articles, over 60 book chapters, and holds 8 patents. In addition, he has a strong commitment to training the next generation of scientists, as demonstrated by training over 100 students, including two who later became NASA astronauts.
Dr Hargens served the National Academies of Science on the Integrative and Translational Research for the Human System Panel of the 2011 Decadal Survey on Biological and Physical Sciences in Space. He also served the National Academies of Science Committee for the 2018 report “Recapturing a Future for Space Exploration, A Midterm Assessment of Implementation of the Decadal Survey on Life and Physical Sciences Research at NASA.”  His recent awards include the Nello Pace Award for Outstanding Leadership and Contributions to the Field of Gravitational Physiology, a Citation Award from the American College of Sports Medicine, the Distinguished Public Service Metal, NASA’s highest award, and the Nicolas Andry Lifetime Achievement Award from the Association of Bone and Joint Surgeons.